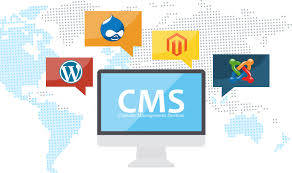 CMS has been popular with many businesses in management and development website in the Internet. Although it is close with almost companies, you know about origin and growth of CMS? This article will share basic history about content management system through major events of development process.

Web 1.0 is referred as the first stage of CMS development on the world wide web (www). Actually, it has been characterized by simple static web content. In 1989, Tim Berners-Lee proposed a hypertext system HTML on the Internet. This had huge benefits in creation words and sentences on computer. Then until 1990, he officially wrote the browser and server software based on HTML content.

Actually HTML was inspired invention from SGML which was produced by IBM by Charles F. Goldfarb, Ed Mosher and Ray Lorie in 1970s. The fact that SGML was stood for the Standard Generalized Markup Language.

Because it is the first time to launch HTML so several first sites were extremely simple with HTML text files. You only need to use an FTP program to copy data to a running web server. Texting was easy to take action.

Then in 1993, Mosaic browser was improved with creation images to support text and make more impression for static brochure.

In the early 1990s, Server Side Includes (SSI) was enclosed with a web page to manage content conveniently. In general, SSI could support you to separate portions of sites from the main content easily. For example, splitting the site menu or even a footer. It also allows you to come on the scene and create interactive forms freely.

In conclusion, we knew the role of text in management websites. It was necessary for a style sheet language for the website although it couldn’t set up layout.